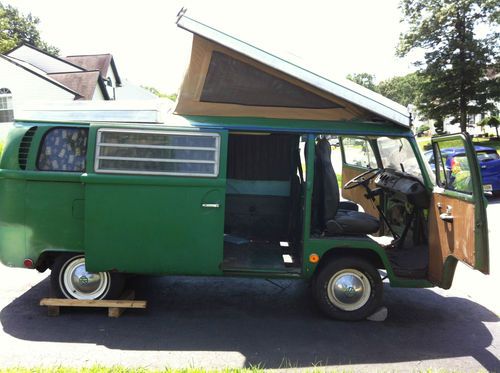 Condition: UsedA vehicle is considered used if it has been registered and issued a title. Used vehicles have had at least one previous owner. The condition of the exterior, interior and engine can vary depending on the vehicle's history. See the seller's listing for full details and description of any imperfections.Seller Notes:"Non-running vehicle. Restoration/parts project. Vehicle must be towed, ***no delivery!***"

This Bus is a large restoration/parts vehicle. Some body work was started and included in the sale is some factory panels that was purchased. The front axle was removed for body work, so all steering, brakes and suspension part are disconnected. All windows are in good shape, including crank windows. Motor and trans was working(last started 3 yrs ago).Vehicle must be towed! Pick-up only NO DELIVERY. Kept in garage for 8 yrs.