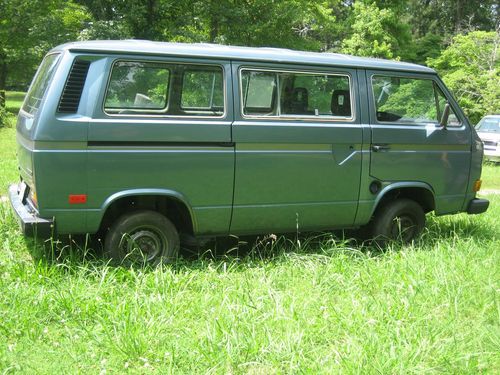 Condition: UsedA vehicle is considered used if it has been registered and issued a title. Used vehicles have had at least one previous owner. The condition of the exterior, interior and engine can vary depending on the vehicle's history. See the seller's listing for full details and description of any imperfections.Seller Notes:"THIS VEHICLE HAS A CLEAR GA TITLE--BEING SOLD AS IS WITH NO WARRANTIES AND NO GUARANTEES--BUYER RESPONSIBLE FOR TRANSPORT--I WILL DESCRIBE TO THE BEST OF MY ABILITY DUE TO THE FACT IM SELLING IT FOR MY FATHER IN LAW WHO GOT "IN OVER HIS HEAD" AGAIN, LOL.. ONE HUBCAP IS MISSING, DOOR HANDLE NEEDS TO BE REPLACED, ANTENNA NEEDS TO BE REPLACED, AND VEHICLE ISNT RUNNING.. VAN COMES COMPLETE WITH A 1991 SUBARU (USED) 2.2 LITER MOTOR 4CYL 130HP ENGINE COMPLETE READY TO INSTALL WITH A KENNEDY ENGINEERED ADAPTER KIT WITH ALL INSTRUCTIONS.."