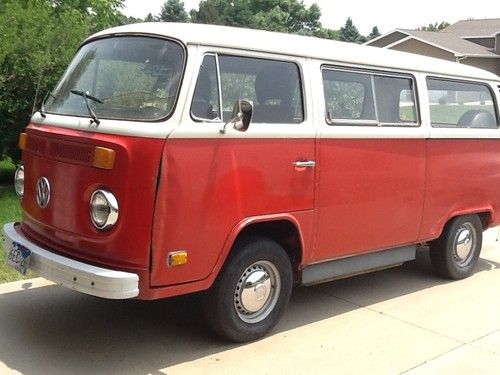 You are bidding on a 1979 VW Transporter.  overall, a good running and driving bus for short distances in its current condition. Fuel injected 2.0 liter engine with hydraulic valves and a fully automatic transmission.  Very solid frame and body.  Good exhaust.  Clear title.

This is a very rare Volkswagen Bus that was converted in the factory, I believe there was about 300 made like this.  It has an electric sliding door with a dropped floor, side ramp(manual), swivel seats and hand controls.  Can be driven with the pedals also.
The mileage says 35402, but there is about 5000 on a rebuilt motor.  Also included is an extra drivers side door.  Would suggest that it is trailered for delivery, not driven, as has not been used for long distances, needs work for that.  Buyer is responsible to arrange shipping and for cost of shipping.
Feel free to ask questions!