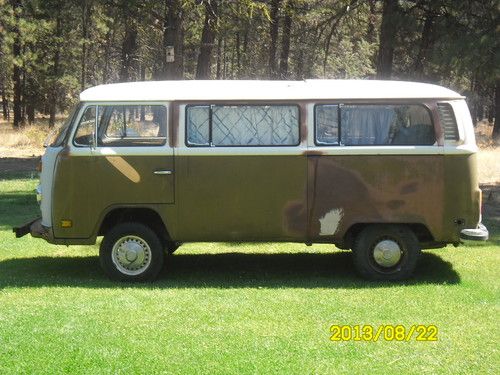 Condition: UsedA vehicle is considered used if it has been registered and issued a title. Used vehicles have had at least one previous owner. The condition of the exterior, interior and engine can vary depending on the vehicle's history. See the seller's listing for full details and description of any imperfections.Seller Notes:"Used. Body reflects normal wear and tear of a vintage vehicle."
Running, driving 1977 Volkswagen Bus with factory sunroof.  Clear title.
A nice, dry, solid high desert bus!  One key fits all locks
Has 2.0 GEX crate motor, installed by previous owner, motor has about 6000 +/- miles.   Good strong motor with no rattles, pings or knocks.
Dual 48 Dellortos.
Compufire Electric ignition.
The wiring and most of the mechanics have been gone through.  Bus has a good electrical system.  Strong alternator.
New spark plugs.
New Facet fuel pump.
New fuel line.  Gas tank has been cleaned and new filter installed.
New oil filter and fresh oil.
Nice new tires.  Nice brakes.
Very solid driver with just some minor work left.
Mostly original paint.   No front or carriage rail impacts.
Some slight surface rust on the front cab floor.  Some dings on the body panels, mostly shopping cart style dings.  No damage below double wall.
Previous owner started body work.   A very quick paint project.
Bus is being sold AS-IS.
Can send more pictures upon request.
__________________________________________________________________
Buyer is responsible for shipping.  Can ship worldwide.