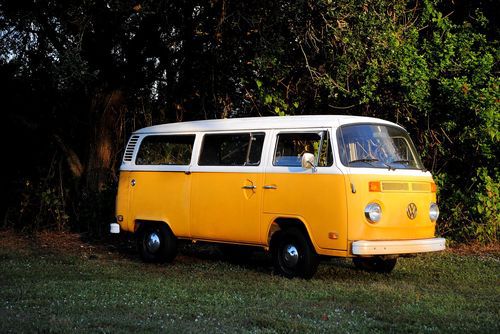 1976 Volkswagen Bus - Transporter - Type 2 - Microbus - Minibus - Hippie Bus - VW Van Name: Colonel Mustard Seven Passenger4 Cylinder 2.0L Air Cooled Engine4 Speed Manual TransmissionThe odometer is only 5 digits and reads 89,700 but based on information from the previous owner I believe the mileage to be 189,700.I have owned Colonel Mustard for 6 years and prior to that there were two previous owners. The man that I bought him from owned him for about 20 years. This bus has been lovingly cared for by all of it's owners. It runs great and always starts right up. Once you learn how to drive it, it has amazing pickup for a 4 cylinder and is very easy to maneuver. Most of the equipment is original. The engine was rebuilt by the previous owner and has never given me a single problem. During my ownership I replaced a lot of things that suffered from dry rot such as the brake lines, axle boots and fuel lines. I put brand new tires on the rear last week and the front ones have lots of tread. I wanted to make sure it was safe to drive since my teenage daughter often takes her friends to the beach in it (don't tell her I'm selling it).One very unique feature is a WORKING A/C which is very rare. Very few of the buses had A/C installed. This one works and is great for the summer down here. It's an old car so you do have to recharge it a couple of times each year.It has been a second car for me but is totally reliable as a daily driver. I often drive it to work and love to drive it on weekends especially to the beach. If your a surfer or a stand-up-paddleboarder you will be able to easily store boards inside (although a rack on top would look really cool). I carried two SUP's - one 12' and one 11' many times inside with just a little sticking out the back hatch. The middle seat can be removed to open up the center of the van for carrying lots of cargo. Everywhere you go in this bus people smile, wave and shoot peace signs. I didn't buy it for attention but I have to admit it's a lot of fun to go out in and have people walk over and ask about it or tell stories about the one that they owned in the "old days".The bus is ready to drive and very safe and reliable. Since it is 37 years old there are definitely a few things that don't work or need a little repair to work but most of these things I just got used to since they were not crucial. I'll be glad to take you for a tour and point anything out that does not work perfectly.My original plan was to keep this for just a year or so to have the experience of owning a VW Bus. It has taken me 5 years to get around to selling it because it holds a special place in my heart. I've been desiring a little convertible roadster as my new second car so now it's time for Colonel Mustard to bring happiness to a new owner.