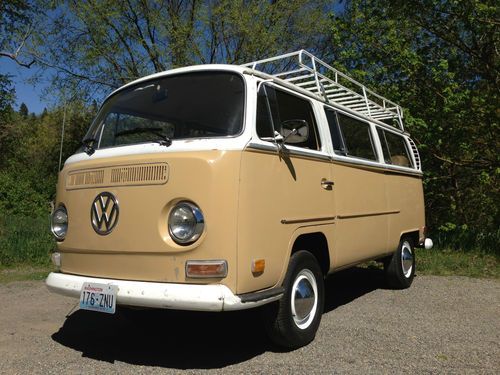 I have a great 1970 VW Deluxe Transporter , I purchased from a good friend who is 75 years old . The van had got to the point where is was needing some maintenance and with his age he was feeling like it was time to let it go . I purchased the Van with hopes of having it my daily driver this summer . So I went straight to work on it . I pulled the already good running motor and wanted to reseal it completely . In that process I honed the cylinders and installed new rings . replaced any parts the motor needed .And resealed the entire thing . Including the rear main seal , Installed a new clutch and a different exhaust . The motor is a 1600cc single port , has a brand new generator, and regulator . rebuilt carb. new plugs etc. The transmission is in great shape and shifts smooth and nice as it should . I did a little work on the brakes also . By replacing some wheels cylinders , a brake line and installed new front brake shoes . I also replaced the tires with a new set of 195/75/14 all season radials . For the body condition it has been repainted many , many  years ago . But still shines nice and looks good I think . Its in no way perfect and has its bit of character having some chips , a few scratches . and a ding here and there .. But I think its great !! And have way more fun driving an old car that has some character rather than one that's had thousands spend on a new paint job . This bus drives so great its hard to express in words how well it performs . The inside is basically all original , The front seats are in great shape ,as well as the door panels and headliner. The rear seats have some wear and a couple small tears . But nothing a good Mexi Blanket cant cover up .

I Honestly don't want to sell the Bus. Especially after getting all the work done and its driving so good . But I had the opportunity to buy the bus of my dreams recently . And cant keep them all . The Roof Rack and Side step are NOT for sale with the bus . I am using them on my new bus . But for the right price I may include them with the sale ?

If you are looking for a nice solid VW bus that's is ready to drive anywhere now . This is a good one !!