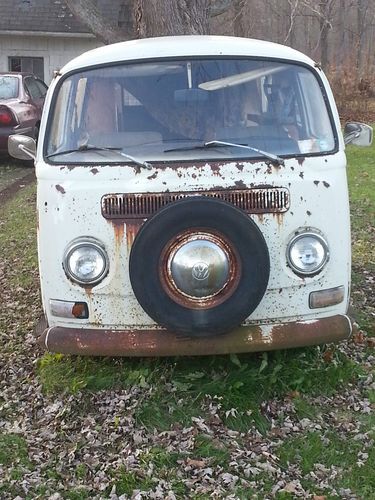 Condition: UsedA vehicle is considered used if it has been registered and issued a title. Used vehicles have had at least one previous owner. The condition of the exterior, interior and engine can vary depending on the vehicle's history. See the seller's listing for full details and description of any imperfections.Seller Notes:"Rust on drivers side rocker panels between front/rear tires. Front floor pan has a hole on the passenger and driver sides by the doors (shown in pictures)Battery tray is gone but there is an aftermarket replacement tray that comes with it. Surface rust on the front and as see in the pictures."

I am selling my 1969 VW Westfalia Weekender, manual transmission, it does run but needs a new battery and the engine should probably be cleaned out prior to being registered for the road.  The engine was rebuilt about 10yrs ago, it is a 1600cc dual port.  This vehicle has not been on the road for about 20yrs, had the means to restore it but I no longer have the time or the proper place to store it.  There is some minor body work that needs to be done, AGAIN RESTORATION PROJECT.  You will need a flat bed to transport it due to it sitting for so long and the tires having dry rot, i can also not guarantee how good the brakes are.  In the images of the interior you will notice a rack that goes on top, we took it off to store it but can be placed back on and is included.  I have a replacement battery tray to go with it as well.  Included in the sale are 2 air cleaners and miscellaneous volkswagen parts.  Please email me with any questions prior to bidding.  Walworth is located in upstate NY.  Deposit of $500 is due within 24hrs of the closing of the auction, remaining balance is due prior to pick up which the buyer is to arrange.  PICK UP TO BE NO LATTER THAN AUGUST 23rd.