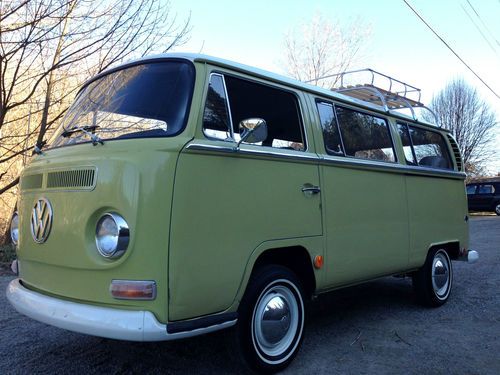 Here is your chance to own a very original 1968 Arizona Yellow Deluxe Van , This is a rare color combo that was only for 1968 . I purchased this great Vw bus from the second owner . Who told me the original owners owned this vehicle till just last year . I do not have records of these things, but the previous owner was a very honest person, so I believe her.. She had told me stories of how all the original owners children learned to drive in this vehicle and was loved by the original owners for over 40 years .

When I purchased the vehicle it was ready for some overhauling . I went through all the braking system, starting with all brake lines , wheel cylinders , brake shoes ,and had all the brake drums turned .
The body of this van is pretty amazing still retaining 95% of its Original Paint . It has had a couple touch ups over the years but is a very solid driver . Yes it does have a little paint fading ,couple dings here and there .But overall has pretty strong paint . I honestly love the way it looks and is nice enough to turn heads and not so nice your afraid to leave it in a parking lot .
The front and rear floors did have replacement pieces welded in and floors resprayed the original color . The rocker panels and good and solid , and is in overall good condition .
The motor is a rebuilt 1600cc with a new alternator, new carb and distributor . the transmission was also gone through at the time of the motor rebuild . So if i had to describe how this bus runs and drives down the road . All I would say is Amazing ! It truly drives like and brand new Vw bus.
The interior is 100% Original, all seat covers , door panels , mats ,and headliner . and are in surprisingly good condition . The tires are brand new with less than 100 miles on them . Also a brand new roof rack was added . And looks great .
If you are looking for a Vw Bus in very good Original Condition with loads of character don't pass this one up . It drives so great who ever wins this auction will not be disappointed ..