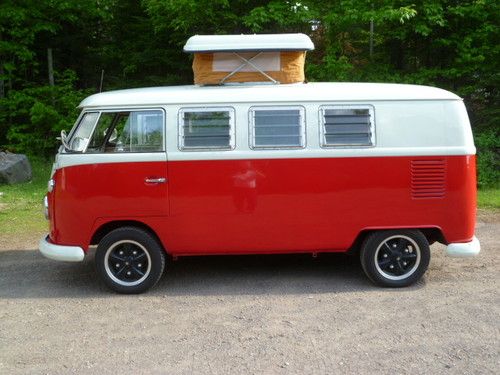 Up for bid is my 1967 VW Camper Bus. I have owned this Bus for 22 years. I purchased the bus in it's original condition in Boulder Colorado. I moved to

Minneapolis and drove the Bus to Minnesota. It underwent some restoration in those early years. About ten years ago I had it repainted by a professional
body shop. There were no rust issues to repair just minor dings and scrapes. I have never liked rusty old classic's as it's just an unending job doing rust
repair. This Bus has a quality older restoration but it IS NOT the caliber of a Barrett Jackson high end rotisserie restoration. On a scale of one to ten I
would rate it about an (8) eight.
In 1999 I was on my way to a VW meet in St Cloud, Minnesota. At 55 MPH the original engine spun a bearing. Unfortunately, I had to have the Bus towed
home. I put in a rebuilt engine and a better carb. Since 1999 I have driven the Bus less than 500 miles. That would also be the miles on the tires and wheels
I had put on the bus. The Bus runs and drives great. It could be driven anywhere as far as I know.
I am selling because I am old now and just don't use the Bus at all. (500 miles in the last 14 years) The time has come for me to scale down on my toys.
Finally, I don't consider this bus to be show quality, just fun quality. That said I have won best of show, or peoples choice, in the smaller local car shows.
I just purchased a 'Retro Sound" radio for the Bus as my old cassette radio was funky. I did not receive the specific face plate I need for the stock opening
on the dash, so the radio is not yet installed. A face plate is on the way from 'Retro' so I hope to have it installed in a few days. There is a photo of the radio
in my photo gallery.
Thanks for viewing my Bus and good luck bidding.