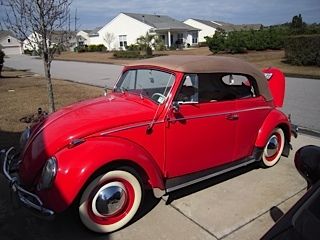 This is a very special car that has been loved and pampered by it's owner who has had it for the past ten years. It was a pan off restoration that was done in the late 90's and then later the engine was up dated to a 1776cc for more comfortable cruising. It has been won every show it has been in! The restorations was done by a now retired restorer of Vintage VW's, his work is still considered to be of the highest quality. The interior is a Subtle Vinyl door panels with matching seat covers. The carpet is double looped carpet that matches the interior beautifully. All interior knobs and handles are high quality chrome and ivory. The rear view mirror is original and had been restored, it has that swing down mechanism that is inherent to VW's. It also has an AM Radio with original knobs and antenna. There is a temp gauge, correct turn signal and headlight switch, etc. The convertible headliner is the correct white for this period. The convertible is tan with matching boot. When the restoration was done all the heater channels were restored and it was converted to a 12 volt. All the fenders and bumpers are original and were triple chrome plated. They still look stunning! Since these pictures were taken the owner has replaced with eyelids over the lights. He since has installed European Halogen sealed beam for better lighting and LED directional and stop light function. This could easily be changed back to original. The owner also has the birth certificate from Germany. He hates to part with this beauty! it really is the best of both worlds, it has the look of the original but is updated tastefully so it is also a blast to drive. It is a really head turner out on the road! I have to say I would love to have this one for myself! Please call Tammi if you have any questions, (916) 606-5687. For more pictures please visit google tlcclassiccars Thanks for looking!