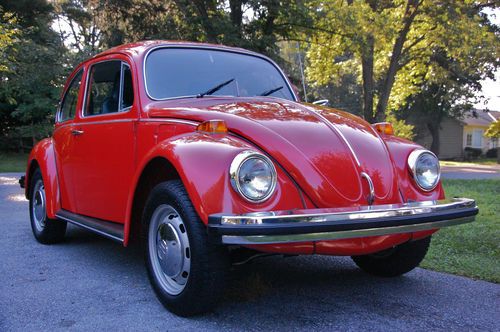 Condition: UsedA vehicle is considered used if it has been registered and issued a title. Used vehicles have had at least one previous owner. The condition of the exterior, interior and engine can vary depending on the vehicle's history. See the seller's listing for full details and description of any imperfections.Seller Notes:"You are bidding on a restored 1974 VW Beetle (base model—not the Super Beetle). According to the receipts that came with the vehicle, it appears to have been restored in the period from 1996-1998. Although little is known of its history since then, it is apparent by its overall condition that it was not used much in the interim. I have had the vehicle completely gone over by a VW Air-cooled specialist and the engine (which was rebuilt), suspension, transmission, clutch, and brakes all operate as they should; the vehicle is in excellent mechanical health. I could not find any rust in this vehicle and the underneath looks as good as the topside—with the pan and other various components being replaced. The only issues involved driver door fitment; cracked steering wheel and broken steering wheel hub clip; steering wheel to seat clearance; and cosmetic condition of rear bumper. These are all detailed below in the "Questions and Answers" section."