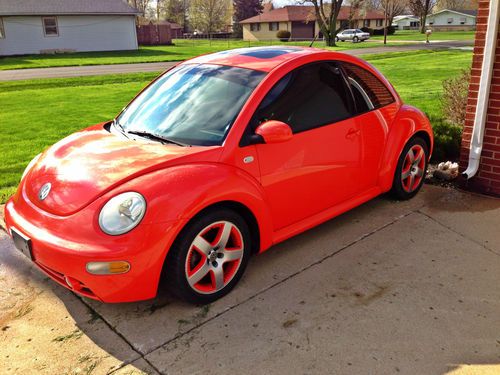 Condition: Used: A vehicle is considered used if it has been registered and issued a title. Used vehicles have had at least one previous owner. The condition of the exterior, interior and engine can vary depending on the vehicle's history. See the seller's listing for full details and description of any imperfections. ...
2002 Volkswagen Beetle GLS Sport Turbo Limited Production
Snap Orange in Color
The Condition is 9/10 exterior as the front driver side has a slight crack in the fender very minor and common.
The condition on the interior is 9/10 very well taken care of.
The car has never been smoked in!!!
The condition regarding the runability would be a 9/10 as it has a minor issue. I have been told by two mechanics that it's the fuel filter that is clogged as it is the original filter. I have been advised by Eight Street Automotive that the fuel pump is in proper working condition so no worries regarding that along with the same diagnosis from Volkswagen themselves.
Volkswagen has appraised the vehicle at $6500.00 in its current condition as it is 1 of 1700 that was made being a limited production model.
FEATURES INCLUDE
Aftermarket tail lamps, original tail lamps are included also.
After market CD Player with Aux Input option.
HISTORY
I came across this car through a friend. Since purchasing the vehicle I have driven it to Florida and back. It is gas not diesel and averages 400 miles per tank. It has never cost more than $42.00 to fill the tank!!! I hate to part with it I am just not mechanically incline to deal with the issue at hand.
CONCLUSION
This is a very rare find.
I receive compliments everywhere I go.
It's a head turner.
You won't go unnoticed while driving this fun little vehicle!
I reserve the right to end this auction at any given time as the car is currently for sale locally.