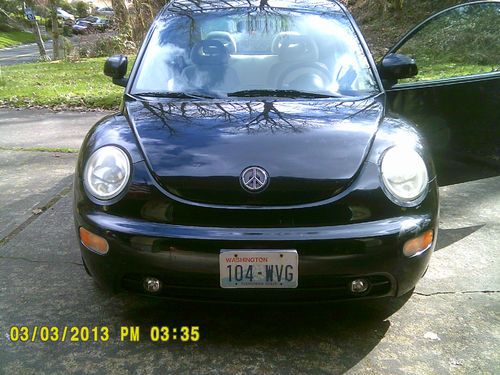 I have owned this Beetle for about 5yrs. My daughter and my mother drove it so they are a few dings that I describe at the end.

The tires are a year old Hancocks
There is a new radiator, front damn and hoses
fuel sensor
tune up
hood latch
Have the paperwork for all the work and the tires.
Its a great little runner and gets good gas mileage
It is the perfect comuter or first car for a new driver.
Sometimes the windows are a little tricky getting them to roll up and down and the key fob is about worn out but still works.
The cd player doesn't work but the radio does so my daughter just used her ipod with it.
The air conditioning doesn't work.
Drivers door has a little door ding
Drivers side back by window was egged and when cleaned up scratched the paint
The back looks pretty clean
passenger side has a scrape along the door and below the door and the front fender
the passenger side front is missing the little VW cap
Both wheels are the passenger side are curb rubbed.
The cd player doesn't work
the heated seats don't work (maybe a fuse)
the glove box does't close (we have a game pushed in there and it holds it shut just fine.)