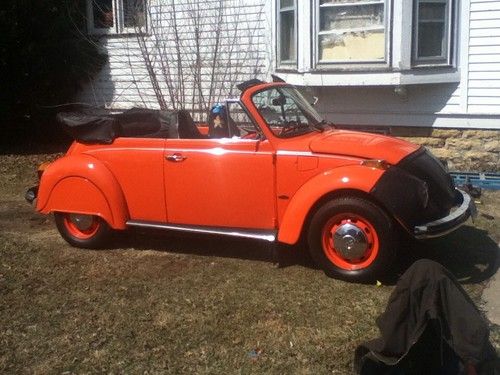 Up for sale is an 1973 VW Super Beetle in good shape.It doesn't run with any consistency. Most of the time it will not start, but when it does it runs good. this is why I have a low reserve on this vehicle.We have owned this bug for about 15 years and now is the time to clean out the garage. The body and paint are in good shape, the carpet and EMPI floor mats are new, the tires are like new. Overall a nice example of a 40 year old car that needs some TLC. There is rust on the frame rail and should be replaced(about $75).There is pitting on some of the floor pans(very common).Also included in this bid is a very nice Ford Deluxe Fiberglas hood, a regular hood and a fiberglas trunk that will go with the winning bid(also some extra parts)GOOD LUCK!!!!!!!!!!!!!!!!!A deposit of $500.00 within 24 hours at end of auction will be required.