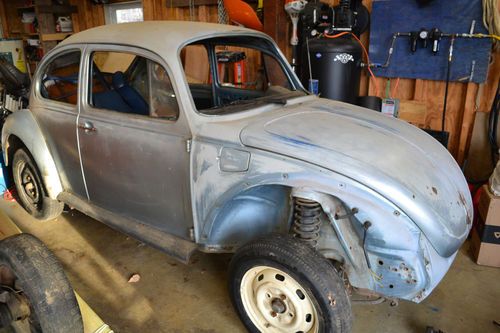 For your consideration 1973 Volkswagen Super Beetle Sports Bug made for one year only. This is a complete original condition restorable Sports Bug in very good condition. It comes complete with orginal German parts ie, fenders, bumpers, and original VW Recaro seats. The body is very straight with no major rust issues in the areas of the floor pans/heater channels. It does have some small rust areas at the lower rear quarter panels that is an easy fix, (see pics) The front end is very tight and it tracks straight with no shimmy or front-end play. It comes with all original fenders, (German) with the exception of one front fender, it is a heavy gauge German fender but from a late model standard Super. It will also need a front windshield all other glass is in good condition. Interior has been stripped, and the Recaro seat will need re-upholstered. This was a very low mileage car when last driven and will make a very nice restoration. It comes without an engine but a complete rebuilt 1600 dual port, (less than 3,000 miles) can be installed for an additional cost of $1000.00 over the cost of the end of auction sale price of the vehicle. Transaxle is in very good condition and shifts in all 4 gears with reverse. The vehicle will have to be towed or trailered. A deposit of $200.00 is required 24 hours after auction ends. Vehicle has a clear title. I reserve the right to end the auction at any time for interest outside of ebay. Email with any questions ................. thanks ..................kj