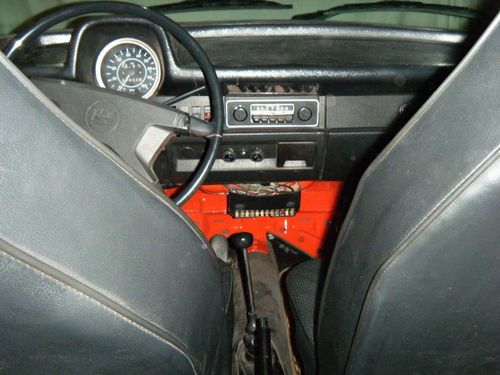 VERY NICE'73 SUPERBEETLE.  UNBELIEVABLE NEW PAINT IN ORIGINAL MARS RED.  RECENT ENGINE OVERHAUL.  EVERYTHING WORKS.  RUNS, SHIFTS, DRIVES EXCELLENT. JUST NEEDS SOME INTERIOR WORK SUCH AS NEW FOAM IN FRONT SEATS, DASH (LOOKS OK WITH DASH COVER BUT WOULD BE BETTER WITH NEW DASH) MATTING BELOW INSIDE OF REAR WINDOW NEEDS TO BE RE-ATTACHED.  DRIVER SEAT ROCKS A BIT IF YOU PUSH IT SIDE TO SIDE, FRONT PASSENGER SEAT CAME OFF THE TRACK WHEN I PUSHED IT FORWARD TO TRY TO CLEAN THE BACK SEAT, I'LL TRY TO PUT IT BACK, STEERING WHEEL NOT PERFECT, I DID NOT LIKE THE CARPET THE PREVIOUS OWNER INSTALLED BECAUSE IT GOT IN THE WAY OF THE PEDALS SO I HAD THE PAINTER JUST PAINT THE INSIDE OF THE FIREWALL WITH THE REST OF THE CAR AND I ADDED SOME WOVEN MATS.  I THINK IT LOOKS COOL BUT YOU MAY NOT.  REAR SEAT WON'T FOLD DOWN BECAUSE THE LAST OWNER PUT TOO MUCH FOAM, FOUR INCH SPACE ABOVE DRIVER WHERE HEADLINER IS COMING OUT A BIT.  ORIGINAL SAPPHIRE RADIO WORKS WELL, CLOCK WORKS BUT IS SLOW, ALL LIGHTS WORK, NEW SHOCKS AND STRUTS, EXCELLENT BRAKES...BASICLY A STUNNING SUPERBEETLE THAT NEEDS SOME ATTENTION TO DETAIL ON THE INTERIOR BUT RUNS, DRIVES, AND LOOKS AWESOME.  I PAID A LOCAL "EXPERT" A TON OF MONEY TO GET IT PERFECT, AND GOT SHAFTED AND THE WORK DID NOT GET DONE.  STILL THE BEST SUPER BEETLE I'VE SEEN IN A LONG TIME.  I WILL ANSWER QUESTIONS AS BEST AS I CAN.  THANKS FOR LOOKING.