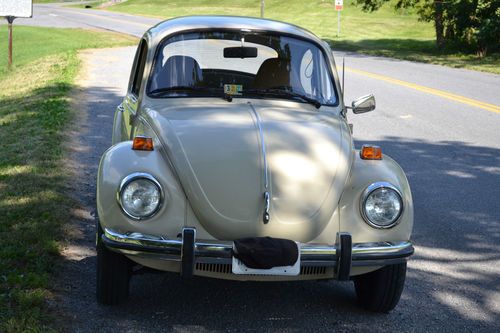 Condition: UsedA vehicle is considered used if it has been registered and issued a title. Used vehicles have had at least one previous owner. The condition of the exterior, interior and engine can vary depending on the vehicle's history. See the seller's listing for full details and description of any imperfections.Seller Notes:"normal wear condition"

For your consideration an all original 1973 Super Beetle with 52,922 original miles. The car is a very dependable daily driver with no mechanical issues that would hinder it being driven cross-country. It is very solid at highway speeds, (0-80 mph) with no shaking or front-end shimmies experienced with older Supers with aging McPherson strut assemblies. Engine has never been rebuilt and is very reliable year round. The electrical system is fully operational, dome light, map light, seat belt light, headlights, turn signals, backup lights, wipers; heating/defrosting blower system is very, very good, tires are new with low miles. All original dash with no cracks, seats and headliner. The drivers seat can stand new covers, but I would replace both front seats at the time of replacement, the rear seat is in great shape. (At the buyers request I can replace both seat covers for an additional charge) All original window glass, window rubber and window scrapers. The exterior paint is in fair shape and there are signs of rust in the fender/body seams, (see the pics) These areas would need to be address at some point if one would choose to restore to pristine conditions. Overall the car is excellent for a not so in-depth restoration to original condition if one so chooses. The floor pans are still solid, the doors are still in alignment and close evenly with the body seams, steering is very tight and it tracks straight without the front-end wandering. Brakes, transmission, all still in very good low-mileage condition. Major tune-up, oil change, valve cover gaskets, valve adjustment, all complete! The car is advertised locally so we reserve the right to end the auction at any time. Feel free to email with your questions. No reserve, vehicle sold as is no warranties stated or implied .................... thanks for dropping by ............kj