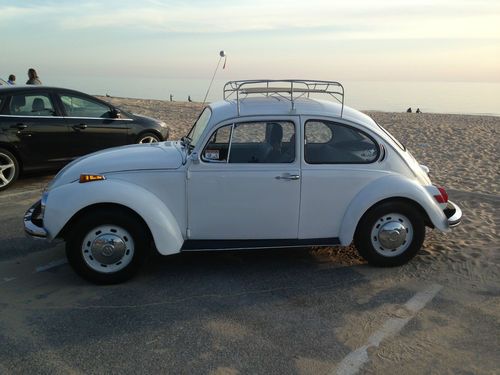 I have a 1972 VW Super Beetle with 83,000 Actual Miles1600cc Engine with 4 speed manual transmissionThe VW has the rare factory sunroof option.This is white with black interior.Looks - Runs & Drives GoodBody & Interior GoodNewer TiresNew CD Stereo & SpeakersEverything WorksThis car gets a lot of looks and thumbs up...This is a fun car, I am just looking for something different - I have three kids and we can not all fit in this if we want to take it to a show or for a cruise. I will consider a trade for another classic vehicle. I would prefer an automatic but I will look at anything. I do not want something that needs a lot of work as this VW is a turn key car and needs nothing.. Some minor issues are ok.Call / Text 616-848-9488No dreamers or time wasters. If you do not have the full asking price in cash or a legitimate trade then please don't contact me. In addition, This is a nice looking and driving car but it is not perfect so please do not expect a perfect classic VW at this price. If this car was showroom new it would be much more expensive...