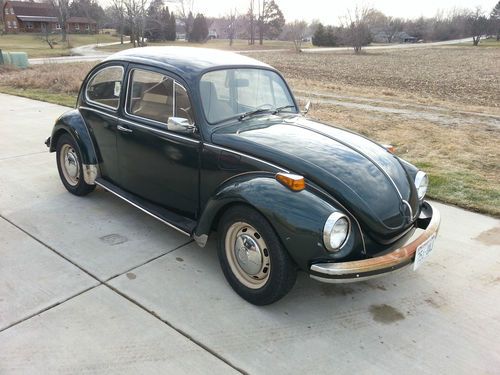 1971 Volkswagen SUPER Beetle 4 Speed Manual Transmission, 1600 CCM Engine, Odometer reads: 55,167, two door all original tan color interior in good condition. Color of car is dark hunter green - very sharp! Stored inside every winter, we are the third owner. New battery in January 2013. Surface rust on front and rear bumper, minor mishap with right front bumper and fender, little rust on rear hood. Interior needs minor cosmetic work. Runs well, tires in good condition. Clear title.  Would like to see this purchased by someone who has the time to restore the vehicle.   Minor work needs to be done.   Good luck bidding!   Will require a deposit of $500 within two days of purchase via Paypal and the remainder will be payable either via Paypay or in cash upon pick up.   Local pick up only, will not ship.