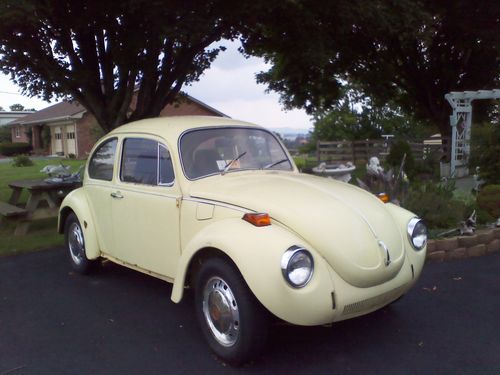 This 1971 VW Super Beetle has the flat windshield, original mileage of 92,858 and has solid, original floorboards and heat exchangers. All four stock tires have been replaced with low miles on them, and the original stock steering wheel and exhaust have been replaced with oem parts..this bug runs great, passes inspection, but is missing side carb spring to hold idle..body is complete, but does have a few dings, dents and rust...rear window glass does show scratches in one area..gas gauge or fuel tank sending unit not accurate, but wouldn't require an expensive fix..vehicle needs complete interior, door/window seals replaced, as all door panels, headliner, and dash cover has been removed..visible rear interior compartment rust due to rear window seal leak(see pic)..many replacement parts accompany this vehicle such as oem door panels, window seals, extra set of moon hubcaps, and other misc parts..rear seat was removed, but will be sold with purchase..bumpers and running boards have been removed, will need replacing if desired by new owner ..am/fm/cd player included with front/rear speakers, along with spare tire..This vehicle is being sold "as is" with pick up/delivery costs and arrangements to be the buyer's responsibility.. Payment should be  made within 7 days of winning bid.  Additional pics are available upon  request..Please feel free to email with any other questions..