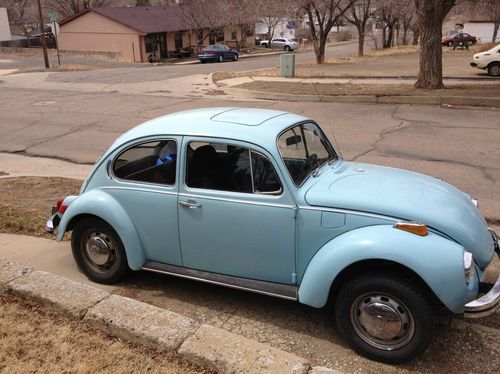 I bought this car about 3 years ago from the origianl owner! Great car inside and out. Backseat is original and new condition. Front seats have some sun damage but have seat covers on them currently. Original hand-crank sunroof. I put a new carpet liner in the trunk.

This car was treated to new brakes, struts, and shocks about 6 months ago. The car itself has 199,700 miles on it and is still a gem. Not to worry it is NOT the original engine! This car starts every day!

This car has the original instrument panel and all lights, turn signals, locks work. I went to the junkyard and found some Super Beetle seatbelts that are over-the-shoulder vs the lap belts that were on it. I recently has a new CD/iPod/Pandora capable stereo installed for a bit of an update!

The tires are in good condition, winshield wipers work and have brand new blades.

This car was definitely loved and taken care of ! There's room for an enthusiast to do more to it or drive it like it is! The fact that this car is 42 years old and still on the road makes it that much more of a gem! Would love to see it go to a good home!

I am selling this car locally as well, so please serious offers and inquiries only.