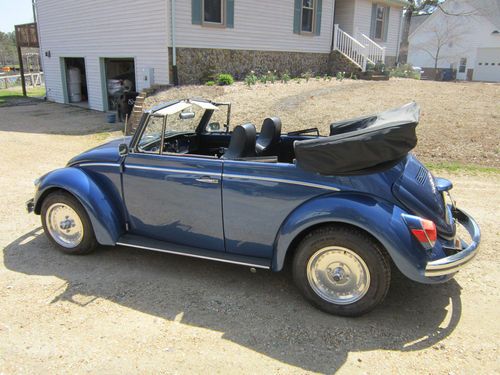 I purchased this car in the southwestern United States four years ago. I am selling it because I am not using it enough to warrant the upkeep and insurance. It has been continually garaged since I purchased it as a Sunday driver. I have never driven it in the rain and the car is completely rust free including, the original floor pans, the heater channels, and those other places you would expect a VW of this era to rust. This is what prompted my purchase initially as rust is a problem with these vehicles. This is not a stock Volkswagon and has a number of non-stock features. The engine is a 2180 cc with a Dellorto two barrel carburetor and electric fuel pump. It is well tuned and performs flawlessly with no smoking and excellent compression. I removed the velocity stacks on the carburetor and installed a smaller K&N filter so I could close the engine compartment for a more traditional look. I have the stacks and taller K&N filter as well as the hinge extensions to accommodate the larger filter if you want them. The stacks do improve the engine performance. I am to old for noisy mufflers so I installed one with a quite rumble. The engine has an exhaust header. From the late shifting I suspect the transmission has a freeway flyer type ratio. This is a very fast VW. The turn signals are recessed into the bumper to give the fenders a cleaner California style look. I have a set of original signals I will include. The front spindles are two inches lower then stock so the car is lower in the front with 145/15 tires that are almost new. The rear has almost new 165/15 tires. The car has custom wheels. The stock steering wheel was replaced with a much smaller one. Originally I did not like this style and I was going to replace it but found it much easier to get in the front seat with the smaller wheel. All of the lights, signals, and the fuel gauge work. The alternator charges. The interior is in excellent condition although not stock. All of the window seals are new. The top and top bows are new. The car is registered and driven as an antique in Virginia.

There is no heat in the car. I purchased heat exchangers and heater parts but decided since I do not use the car in cold weather not to install them. The car had no horn. The spare is a 165/15 and does not fit the original location designed for it. I purchased a newer style crank jack. There is no windshield washer and no radio. The increased engine performance decreases the gas milage. The milage is what appears on the odometer and may not be accurate.
This car is in exceptional condition but is over 40 years old and is sold as is. Transportation is the responsibility of the buyer although I will assist in any way I can. You can fly in and drive home if you like.  Payment by bank money transfer is preferred. If you are going to be near Williamsburg Virginia please come and drive it.
On Apr-09-13 at 15:14:31 PDT, seller added the following information:

I added bonnet pictures. There is a picture looking at the are uncarpeted to see the condition. There is a picture looking into the tire well but it does not fit in the 165/15 tire I use as a spare. The 145/15 front tire does fit the well. I included the tire well as it is an excellent indicator of the lack of rust on the car. I included a carpeted picture with the spare as I cary it with the new style jack. The carpet does not have the fiberboard under it as the original did.

I added a picture I took laying on the  garage floor of the floorpans looking forward. I included a view of the heater channel.  I appreciate why anyone looking at this car is concerned with rust. There is no floorpan or heater channel rust on the undercarriage.