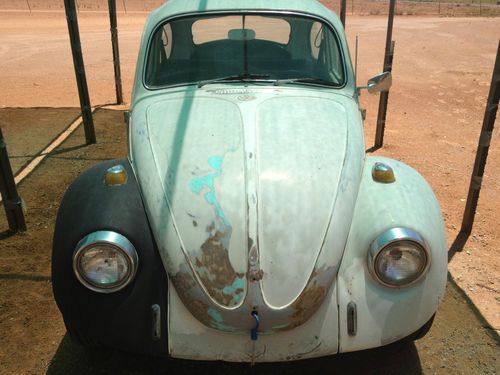 I am helping a friend by listing several of his vehicles and projects. I will make every effort to describe the vehicle as best as possible, should there be a detail or question please contact the listed phone numbers and or email through EBay and I will get the answers. He is listing 5 different vehicles so should you require more photographs please let me know and we will get those to you as well.

BODY:
Has been sanded down and prepped for painting. Could use another light sanding since it has been sitting. Has nice chrome step sides. All new glass installed.
INTERIOR:
Nice clean upholstery. New sound system with large speakers in rear deck. The radio/CD player has removable plate.
ENGINE:
New rebuilt 1835 CC chromed out (hauls ass!) Has a 44 Weber carburetor, duel exhaust. Transmission is new.
WHEELS & TIRES:
5 new tries and chrome r
This bug runs and drives excellent! So feel free to drive it home, but we recommend you trailer just to protect your investment until you get it home. This option is up to you.
Owner will assist with loading the vehicle on your trailer, but all other transportation costs are the responsibility of buyer. Should you have any questions we encourage you to come and look at this vehicle and others listed before buying. The owner has clear title in hand. The Reserve is set low to move quickly, so bid often.
Should you need to contact by email please go through EBay procedures, if you have specific questions or want other details please contact Robert (575) 546-7686 no answer please leave message, you know the drill. Vehicle is located in Deming, New Mexico Land Of Enchantment and rust free vehicles!