1968 Volkswagen Standard Beetle Base 1.5l With Matching Numbers on 2040-cars 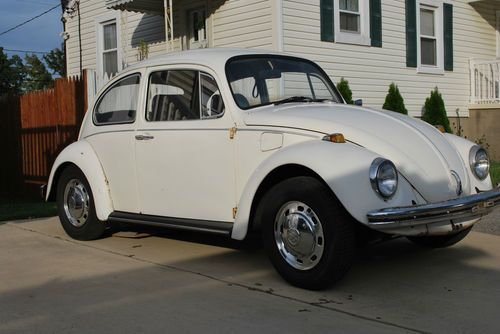 Up for auction is one, 1968 Volkswagen Standard Beetle. I recently purchased this beetle in August 2012. It was my goal to restore the beetle. Unfortunately, I have come to the realization that I do not have the time to invest to properly complete the project.
By no means am I a Volkswagen expert. However I will try my best to provide you with the most accurate description as I possible can.
As I'm sure you are already aware, there are many beetles scarrated throughout the nation, waiting to be restored. However, the major attribute that attracted me to this beetle were the "matching numbers."
Chassis ID# 118 152 632 (manufactured in September 1967)
Body ID# 118 152 632 (the original ID plate is still mounted inside the trunk, behind the spare tire)
Engine ID# H5 059 933 (44bhp DIN1500 M157) (manufactured in September 1967)
In addition to the matching numbers, I was attracted to this beetle's clean, unmolested condition. Sure, there are some bumps and bruises but overall, the beetle is fully intact.
Mechanically, the beetle is also in good shape. When I purchased the beetle, I drove 45 miles home without any issues. The transmission is solid and shifting is smooth. There is no popping out of gear. Reverse works without any issues as well.
The odometer reads 8,764. Obviously, I would imagine that the odometer has rolled over once increasing the milage to 108,764, However, I have no way of documenting this information.
Since, I've owned the beetle, I have adjusted the valves and changed the oils. In doing so new silicone valve cover gaskets were installed as well as a new oil strainer, silicone oil strainer gasket, and oil drain plug. All parts were purchased from Wolfsburg West.
The lights work including the headlights, brake lights, and both front and rear turn indicators. The horn works.
I start and drive the beetle about once a week two keep everything up and running. One issue the beetle is currently displaying is a tendency to stall at stops. I would like to think that this is a simple adjustment or a matter of cleaning the carburetor. I have not attempted to isolate the problem.
Please note that this beetle is registered as a historic vehicle. It has not been inspected. As a result, the vehicle will not come with a Maryland inspection certificate.
This beetle has a clear, Maryland title in hand.
The GOOD:
Good template for full restoration beetle
Matching engine, chassis, and body ID numbers
The beetle starts and runs
Rust is minimal, most is surface rust only
Both heater channels are intact
Locks work
Spare Tire
Container for windshield wiper and cable included
Jack Included
Windows crank up and down
Seat belts work and retract
Seats are clean
Radio precut in the dash is still present
Original steering wheel
Matching numbers
Electrical components work (indicator lights, head lights, tail lights, turn indicators, license plate light, horn)
Fuel gauge works
Odometer works
The NOT SO GOOD
Tendency to stall at stop signs and traffic lights.
Interior light does not work
Window, windshield, and back glass rubber needs to be replaced (slight moisture on interior after precipitation)
By no means am I a Volkswagen expert. However, I do believe that this is a solid and sound Volkswagen Beetle. I also believe that it is a strong candidate for a complete restoration. If you should have any questions, please do not hesitate to contact me. I will do my best to answer any and all of your questions. I would prefer if this vehicle is picked up from it's current location in Parkville, MD. However, if you are interested in having the beetle shipped, please contact me prior to auction's end so that proper arrangements can be discussed.