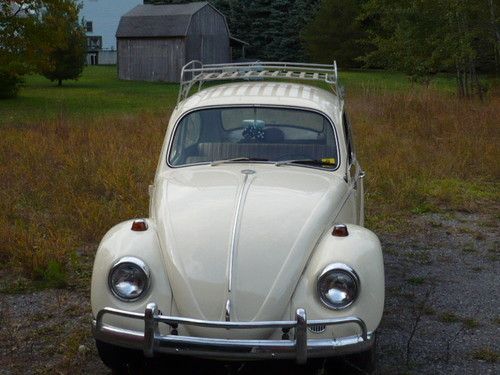 1967 Beetle, first year of 12 volt. 1600 dualport engine with Bugpack shifter and quad exhaust. Single carb. Original pan and heater channels. Originally a "left"coast/ New Mexico car, hence the original sheetmetal. Bumper guards, backup lights and roofrack . New weatherstripping and the runningboards are solid and all gaps line up just fine. Suspension was gone through and all parts were replaced with new factory components. Chrome hardware shines with a couple of small imperfections. Interior, headliner and dash are perfect and uncut or modified. The DS seat needed new foam so the previous owner redid the entire interior. All glass is clear and not foggy or cracked. Rockford Fosgate in dash CD player with remote. Painted two tone in the early 2000's and has been stored indoors in a heated building since. This Beetle runs /stops and steers great but the brakes should be bled due to long-term storage. Original jack and spare tire along with hubcaps and VIN plate.  From what I can determine, original color was red but the bodywork and paint are first class with no short cuts or shoddy workmanship evident. Wheelwells and fenders are all metal, no filler, anywhere!! I "chased" this car for ten years from the prior eccentric owner. Look at the pictures and you be the judge. As always, I strongly advise that this car be looked at in person and I will gladly store until Spring/Summer 2013. This VW was on a cover of a local magazine as a first prize in a contest prior to my ownership. I have a copy of the magazine and article with pictures. I am sure I forgot some of the specifics so just inquire and I will answer all questions as best I can. Odometer shows 45,000 miles. I know that there are less than 10,000 miles since the larger engine was installed and the body was refreshed.   Clear title and I am not looking for any trades at this time. Bidders with less than 10 positive feedbacks will be cancelled. A $500.00 deposit (non-refundable) is due 5 days after the auction ends. Balance to paid in cash prior to the new owner's possession.  Car is also for sale locally and I can cancel this auction at anytime. I am downsizing my collection and this vehicle is being sold as is due to it being 46 years old. No surfboard is included with this Beetle. Spring is just around the corner.  Check my feedback and bid/own with confidence.