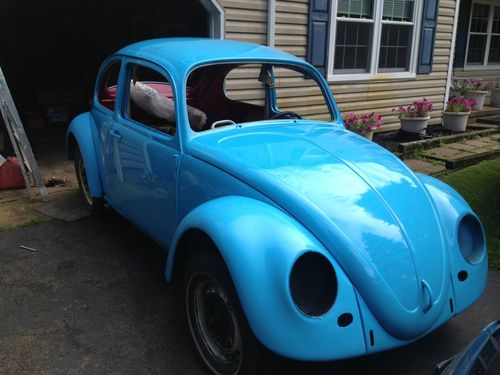 Condition: UsedA vehicle is considered used if it has been registered and issued a title. Used vehicles have had at least one previous owner. The condition of the exterior, interior and engine can vary depending on the vehicle's history. See the seller's listing for full details and description of any imperfections.Seller Notes:"No title"

For sale is a 1965 Volkswagen Beetle Project. I had purchased this car with the hopes of restoring it but being in college never had the money available. There is no title with this car. It will only be sold with the bill of Sale from my self and the previous owner. This car can easily get a new title through a Titling service. This car has scratches and nicks in it. The one fender is not painted. There is almost no rust in the car beside some surface and the floor pans are solid. It looks like half of the passengers pan was replaced by the previous owner. The car has been kept in a garage for the past 15 years that i know of, maybe longer. The car comes with a 1600 cc engine that has been recently rebuilt and bored to 1776cc. The engine looks beautiful. I have all the glass for the car, front windshield, rear window, rear pop out windows and both front windows. Also included are are the front seats and the rear bench seat. These are a off white color. There are tons of parts included in this auction. New shocks, stock and aftermarket exhaust, brake kits, window regulators, factory radio, steering wheel, engine stand, front and rear bumpers, heater boxes, newly painted fuel tank, cardboard glove box, 3 speedometers, fuel gauge, original wiring harness and so much more. I will be adding new picture when i get time. This is a perfect car to rebuilt or part out. I need to get rid of the car asap so please send offers. I encourage buyers to come out and see the car.