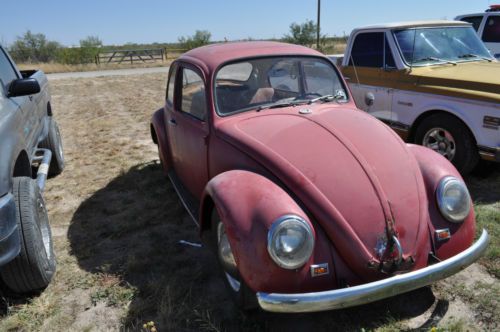 Condition: UsedA vehicle is considered used if it has been registered and issued a title. Used vehicles have had at least one previous owner. The condition of the exterior, interior and engine can vary depending on the vehicle's history. See the seller's listing for full details and description of any imperfections.Seller Notes:"paint chips, needs window/sunroof seals, leaks when it rains. Needs a paint job, unless you like the patina look. used tires."

I have a 1965 Red VW Bug for sale. I just put a rebuilt 1600cc motor in it about 2 months ago and have only put about 400 miles on it. Last I checked with fill ups and mileage, it was averaging around 32 MPG on the highway and around 26 in town. It runs good but does need some body work in areas and a paint job unless you are looking for a weathered look then it already has it. It is a manual stick with new synthetic fluid in the transaxle I added about 6 months ago. Shifts well and drives good but will need some new tires eventually and has normal oil likes like any VW will. Does not use oil but will get low after about a month and I have to add a 1/2 quart to top it off. I put a new turbo exhaust on it the same time I was placing the motor in it. I installed a new clutch kit, pressure plate, clutch and throw out bearing in it. I changed out the fuse holder with new updated fuse block but needs to be rewired to a better location I think. Sun roof works but seals are no good, leaks when it rains a lot. Brakes were changed about 3 years ago.

I also have a 1970 VW bug that runs but needs a lot of work for interior. I also have a 1973 VW bug needs motor and work to get it going. I will let these go with the 1965 VW beetle for the full price. If you only want the Red 1965 Beetle let me know and make an offer for it by itself. I am willing to work a deal for the right amount. I will deliver/drive the red VW within 300 miles of my destination but the other beetle will be the buyers responsibility to pickup.