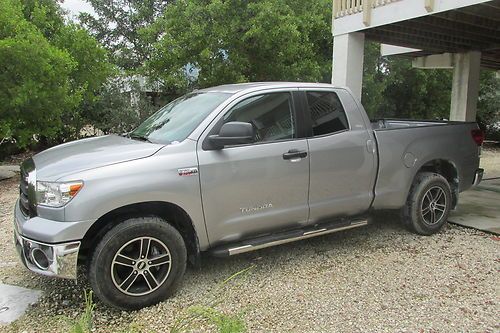 Condition: UsedA vehicle is considered used if it has been registered and issued a title. Used vehicles have had at least one previous owner. The condition of the exterior, interior and engine can vary depending on the vehicle's history. See the seller's listing for full details and description of any imperfections.Seller Notes:"Like new with only 4,650 miles!"

I am selling my 2012 Toyota Tundra Double Cab SR5. It is a 2WD model, with the 5.7L iForce V8, Automatic transmission and towing package.

This truck is in absolute pristine condition. I am only selling because I simply do not drive it. I bought it 27-September-2012 and as of this posting it has 4612 miles on it. The truck has no flaws. It is super clean and practically brand new.

Silver in color, with full length running boards, fog lights and 18" BBS wheels which make the truck stand out slightly from other Tundras. The tires are dirty in the pictures only because there is road construction in my neighborhood.

The rear seat has under seat storage and splits 60/40. The interior is cloth and in great shape (again, only 4600 miles in 10 months). The truck has NEVER been smoked in. I used a seat protector underneath the child seat that was in it.

There are some scratches in the bed, as it is a truck and although rare, I occasionally put stuff in it. There is a hitch and trailer wiring. It tows like a dream for both my boats.

It has a back-up camera that is visible in the rearview mirror. If you have never had one they are priceless for backing up to a trailer.

The truck was stored underneath my house out of the tropical sun. This is the second Tundra I have owned. They are great, reliable, smooth riding trucks. Consider my Tundra for your next truck and you will not be disappointed.