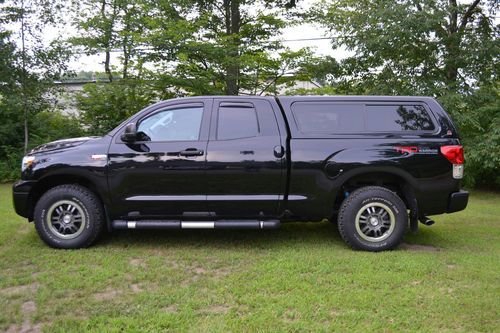 Condition: UsedA vehicle is considered used if it has been registered and issued a title. Used vehicles have had at least one previous owner. The condition of the exterior, interior and engine can vary depending on the vehicle's history. See the seller's listing for full details and description of any imperfections.Seller Notes:"SHOWROOM CONDITION"
2012 TOYOTA TUNDRA DOUBLE CAB
ROCK WARRIOR PACKAGE SPECIAL EDITION
TRD EDITION
ONLY 3800 MILES!!!!!!!
5.7 V8
BLACK ON BLACK
CD PLAYER
BLUETOOTH
BACK UP CAMERA
TOW PACKAGE
4.3 GEAR RATIO TOW PACKAGE
UPGRADED EXTRAS INCLUDE:
TRD DUAL EXHAUST INSTALLED BY TOYOTA
STAINLESS RUNNING BOARDS INSTALLED BY TOYOTA
LEER TRUCK CAP PAINTED AND INSTALLED BY TOYOTA
TRUCK CAP GUN RACK CARPETED AND LOCKING
WEATHERTECH RUBBER FLOOR MATS FRONT AND REAR
I HAVE THE CLEAN TITLE IN HAND READY TO SELL