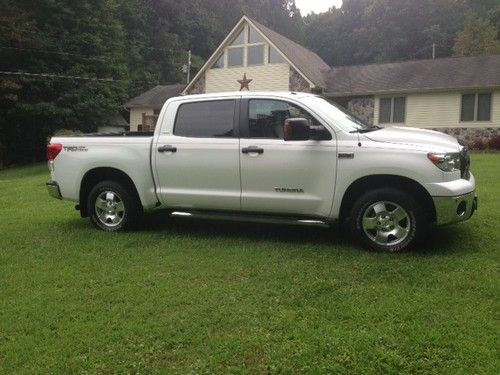 Condition: UsedA vehicle is considered used if it has been registered and issued a title. Used vehicles have had at least one previous owner. The condition of the exterior, interior and engine can vary depending on the vehicle's history. See the seller's listing for full details and description of any imperfections.Seller Notes:"2011 TOYOTA TUNDRA 4X4 CREWMAX 5.7L V8. COLOR IS SUPER WHITE WITH GRAY INTERIOR. SEATS 6. BACK UP CAMERA, TRD OFF ROAD PACKAGE, FRONT AND REAR PARK ASST. REMOTE START, BED STEP, HANDS FREE PHONE CAPABILITY AND MUSIC STREAMING VIA BLUETOOTH AND MANY MORE FEATURES (see label). ALSO HAS EXISTING TOYOTA WARRANTY. SERVICED REGULARLY AT TOYOTA. EXCELLENT CONDITION. LOW MILES. LOTS OF EXTRAS. ALSO HAS BED LINER, POWER BACK WINDOW AND ROLL SENSING CURTAIN AIRBAGS. DRIVER SIDE SMALLER MIRROR IS CRACKED (see pics)."