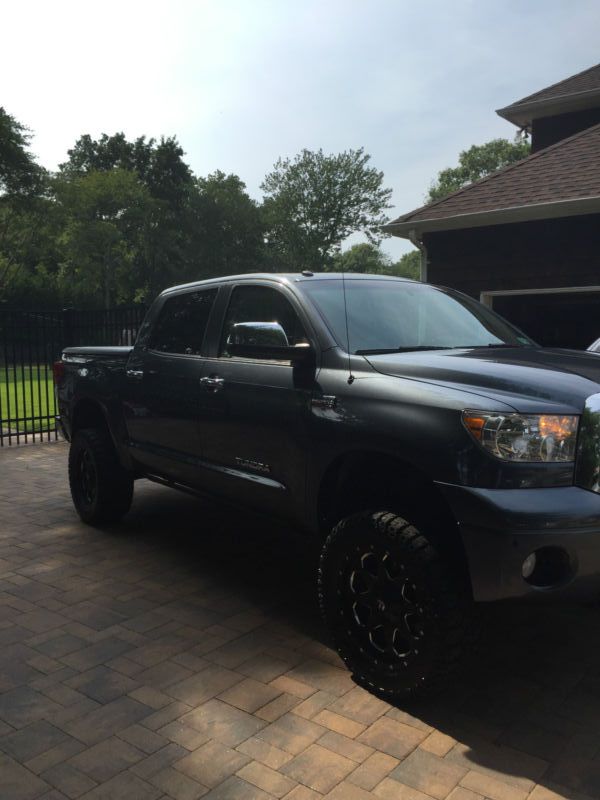 Feel free to ask me any questions about the car : kamilahstands@netzero.net .
UP FOR SALE IS MY 2010 TOYOTA TUNDRA LIMITED 4X4 TRD 4 DOOR PICKUP. THIS TRUCK IS TRULY AN ORIGINAL OWNER DRIVEN
ON SUNDAY SHOWROOM GARAGE KEPT CONDITION. I HAD A 3 INCH FRONT AND A 2 INCH REAR LIFT KIT INSTALLED WHEN I BOUGHT
IT AS WELL AS 20 INCH DICK CEPEK ALUMINUM WHEELS WITH 305/55R20 RADIAL F-C II TIRES. AUTO-RETRACT RUNNING BOARDS
WHICH EXTEND AND RETRACT WITH THE OPENING OF THE DOORS. THIS TRUCK HAS 16,500 ORIGINAL MILES. FULL LEATHER INTERIOR
WITH EVERY OPTION. POWER REAR CARGO WINDOW. SOLID HARD TONNEAU COVER WITH FACTORY TOYOTA BEDLINER. TOW PACKAGE. 5.5
FOOT BED. BLUETOOTH, IT IS METALLIC BLUE WITH GRAY LEATHER INTERIOR. 5.7 L MOTOR. RUNS DRIVES AND LOOKA AMAZING.
THIS TRUCK WILL LAST FOREVER. IT HASN'T EVEN BEEN BROKEN IN YET WITH SUCH LOW MILEAGE. THIS IS THE TUNDRA EVERONE
WANTS. DONT MISS OUT ON THIS ONE OF A KIND TRUCK.