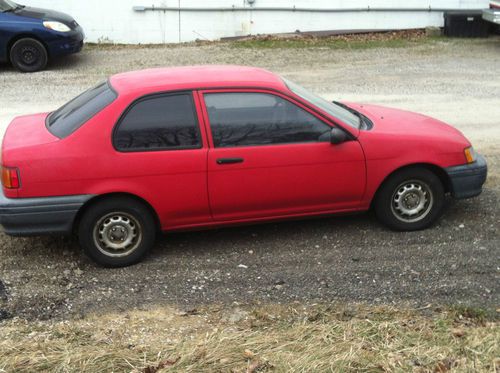 Up for sale is a 1992 Toyota Tercel, manual transmission.  Car is 2 doors, has good body.  Motor is blown, there is a hole in the engine block according to my mechanic. Needs to be replaced.  Rest of the car works fine.  Has good tires, interior is good, except for tear in driver's seat, but fixable. heater/ac work, very clean and well maintained.  Great gas mileage.  Body is good, needs a little polishing, but no big dents, rust  or anything. We drove from California to Ohio on $118 gas in 2009.  This was my son's car and he just got a new one since the motor went out.  Would be a good reliable vehicle with a new motor.  You can use up to a 94 or 95 Tercel motor as I understand it.   Having said that, all offers SERIOUSLY CONSIDERED, Reserve is $500. message me or text questions to 740-590-4101.   If I don't respond right away, I will on my break at work.  My phone does not take messages, though, but I"ll see you called and will call you back ASAP. Thanks for looking and have a great day!  Also, if you want the car, I'll tow it up to 100 miles to you, included in the price, if you want more than that, you pay the difference per mile to my AAA. Car sold AS IS and is represented honestly.