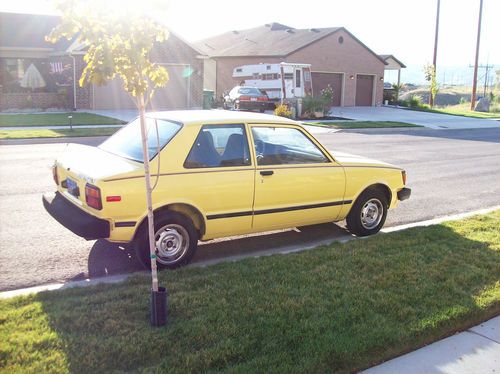 1982 Toyota Tercel Std 2 door coupe with 5 speed manual. My wife has grown increasingly jealous of the gaggle of female admirers that I regularly attract with this, the very apex of early 1980's Japanese econobox engineering, thus I am forced to part with my dream car. All original, comes with factory A/C and factory optional tape cassette player. For a 31 year-old Tercel with high miles, it is in excellent condition. Dash has the cracks one would expect of a car this age, but they are all hairline cracks. Front seats have seat covers but are pretty torn up. Back seat and carpet are in good condition. Anyone familiar with these 1st generation Tercels knows that they are a lot of fun and are extremely reliable.

The Good:
The Bad: