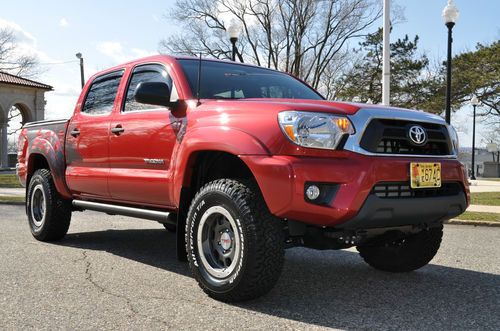 Condition: Used: A vehicle is considered used if it has been registered and issued a title. Used vehicles have had at least one previous owner. The condition of the exterior, interior and engine can vary depending on the vehicle's history. See the seller's listing for full details and description of any imperfections. ...
Hello folks and thanks for stopping by to look over my beautiful Barcelona Red Metallic 2012 Toyota Tacoma TRD T/X Baja Series Limited Edition pick up. Only 750 of these tacomas were up-fitted by hand once they rolled off the line in San Antonio,TX by TRD factory workers in order to make for the very capable, reliable and rugged machine you see before you.

I could go on and on and list all the features the truck has like navigation, satellite radio, back-up cam, JBL stereo w subwoofer, etc. but if I could call your attention to the picture of the window sticker below...you'll clearly see what all the fuss is about when you read the optional equipment list that makes up this very capable and creature comfortable package with all the brawn and technology demanding customers could expect in a truck today.

Once I got home from the dealership I had the front windows tinted with quality carbon film that matches the back. Once my wife tried getting in the truck, I knew it needed some really tough looking power folding side steps to make it easier for her to get in and out. I chose the model from AMP RESEARCH which included the LED light kit and for the fact I've used them before with great longevity. Although cool, they're not cheap at $1,500 for the pair plus labor. I also replaced the stock air filter with a K&N panel filter to breath a little easier, an Advantage tri-folding "hard" tonneau cover which is a real trick unit for it can be completely removed in under a minute for the ultimate in portability and function and last but not least, a set of 4 smoked Weather Tech in-channel rain guards.

Happy bidding and bid with confidence!

Message me with any questions or to make an appointment to stop by and get a better look!