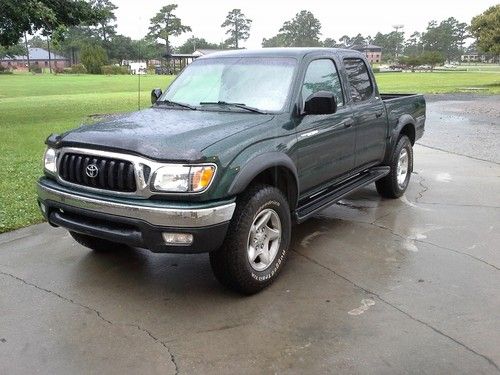 Here is a 2003 Toyota Tacoma Double cab Limited. It comes equipped with 4 wheel drive and also has the SR5 package and TRD off road package. I am the second owner, the first owner was a older gentleman in Virginia and he drove it till 83,000 miles and I've had it since. I've done a HUGE tune up on this truck. i replaced the timing belt, idle pulleys, thermostat, water pump, belts, anti freeze, plugs, wires, air filter, fuel filter, changed the oil, rear diff fluid, transfer case fluid, brand new set of tires and a new radio. The reason I'm getting rid of the truck is it's too small i need a bigger truck. over all its a great truck and will have no due maintenance until the next oil change is due. the only thing that is wrong with the truck is the rear bumper has a little rust on it and there is a dent under the right rear tail light i have pictures showing this. If you want more pictures here is the link to my Auto Trader posting - http://www.autotrader.com/cars-for-sale/vehicledetails.xhtml?LNX=PSEMAILADLIVE&searchRadius=0&listingId=352754346