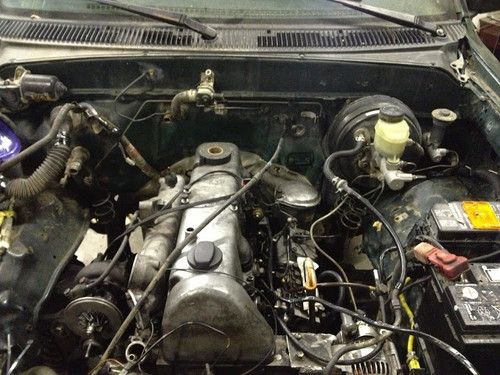 This is truly a one of kind vehicle, no other exists in the world, as far as i have been able to tell/research. I am a perfectionist to a fault, and since I was building this, my 5 year long dream truck idea, I took care in making everything as solid and perfect as possible, going to extra lengths to ensure the truck was PERFECT in its function. The aesthetics took a backseat to the life of the truck- motor, transmission, drivetrain, as well as driver comfort. This 'Dream Truck' of mine is a 2000 Toyota Tacoma extended cab TRD offroad package, 5 speed manual 4X4 pickup truck with an OM617 Mercedes Benz 5 cylinder Turbo Diesel motor powering it. The motor started out STRONG, from a 1985 300D with 180K miles, the highest horsepower OM617 ever produced. To this I added 3" straight pipe from the turbo back, a HUGE oversize intercooler (functions as the grill) and the infamous Monark injector nozzles. These mods bump the 125 hp motor to around 160, with ~220 ft lbs of torque. I have never had it dyno'd, just my best guess from starting specs. Truck had a previous salvage title from a LIGHT front end accident which broke the radiator, spilling the coolant and blew the motor. So it was a perfect candidate for the motor swap. I invested over $5,000 in addition to the truck, replacing numerous parts along with the motor swap. It basically underwent a 3 month full restoration, myself for 2 months at 50/hrs a week and 1 month 40 hr weeks by two people, so just over 500 man hours was invested into this truck. the motor was pulled and engine bay prepped. Interior was completely gutted to the metal, all new soundproofing was added to the floors and doors so it could quietly run big tires (and it does) new carpet installed, dash disassembled and cleaned, everything got to working order. a few small rust spots existed but were all nipped in the bud before they could become anything close to a problem (truck was essentially rust free starting out, and no frame rust whatsoever) there is only one small rust spot on the passenger side pillar that still needs fixed. The entire underside of the truck was disassembled, ground where any light surface rust was, treated with rust reformer and then undercoated for additional sound protection. The motor was gone through just as well. Every single gasket and seal on the motor was replaced with the exception of head gasket (this took three days alone, scraping every last bit of old gasket material off until my fingers were raw) even front and rear mains were replaced (although the rear main still has a very slow drip, thats the only leak, bummer. The Benz motors have chronic rear main drips. This is only about 3 droplets per week)

I have timed 18.5 mpg city and 25/26 hwy. not bad!!! esp for having 33 inch tires and lift.
The motor starts and runs great, even in sub zero temps. the Toyota 5 speed manual is a perfect, crisp shifter (i put a brand new OEM Aisin clutch in it, and REDLINE MT-90 tranny oil (you have no idea how important that $100 jug of oil is) which shows the care i took in making everything in this truck was built to last (since i was building for myself) The 5 speed trans really wakes the diesel up!!! I used a 4X4Labs adapter plate to mate the Benz motor to Toyota trans, this is a $600 cnc aluminum mate plate made to the exact specs for the OM617 to a R150F toyota trans. I didnt cut corners throughout the project, I spent the money to do everything right the first time, rather than half assing it and dealing with problems later. 2,000 miles later that care has so far paid off, not a single hiccup so far, it has performed perfectly since pulling out of the shop in early february. All new fuel lines were run, from inside the tank to the motor. The fuel tank was dropped, cleaned, old lines gutted and a new hard alum line for fuel pick up was installed, all new OEM gaskets going back toegther, etc. now 1/2 PEX serves as the feed and a high flow 5/16 as the return. I didnt do a two tank vegetable oil conversion (this was my original idea) because you can run 1/2 diesel 1/2 veg for about 9 months per year with the mods I made (upsize fuel lines, upsize fuel filter with an engine oil cooler that doubles as a fuel filter heater, brand new Bosch lift pump, etc) and I also didnt want to lose my 3rd and 4th seats in the extended cab area to a stinky veg oil tank. But this truck is a perfect candidate for a full on two tank conversion since the OM617 is hands down, the best vegetable oil burning motor ever made.
The basics- truck has a 3" body lift (needs at least 2" body lift to get the benz motor in) with 33" Baja Widetrack MTs, great tread in the back, only a bit in the front. Power windows and locks all work, power steering, CD player, heat works great, no AC. I am selling this truck as is, it is by no means perfect yet. It needs a front end alignment (wanders a bit) a front lower skid gaurd, rear fender flares, some light paint or body work (mostly on the tailgate) I want to make a louvered guard in the front for the intercooler like the one I made for the radiator, and Ive got a sweet flat black Mercedes emblem I was going to work into the design, also need a good set of seat covers. It doesnt need anything to be functional or driven, since I have been driving it the last few months. The electric fan needs a thermostat (I have it) for auto-on but so far its cooling plenty, hasnt needed the fan yet. Id imagine by the time hot weather is here it will. I built a great cooling system for it using hard galvanized steel pipes that run to a tiny dual core radiator and elec cooling fan mounted up under the bed (no obstruction into the bed area) the steel hard lines dump off lots of heat before even getting to the rad. It uses the stock toyota coolant temp sensor AND mercedes coolant temp sensor, to the stock in dash hot/cold gauge.
Its difficult for me to even list this truck after all the time and money and care that went into building it, and I dont need to sell it, but I have two trucks and minimal space and need to sell one or the other. Please no low ball offers, I wont even consider them. Ill gladly keep this truck if I dont get a decent offer. please ask any and all questions, and please see my Picasa Web album with 100 photos of the build!! https://picasaweb.google.com/108592734019829103745/2000ToyotaTacomaWMBZTurboDiesel
maybe someone else has had this same dream truck idea. Its perfect, like a mini Cummins. hauls, wheels, good mpgs, and the most reliable, simple, legendary diesel motor ever made. thanks for looking!