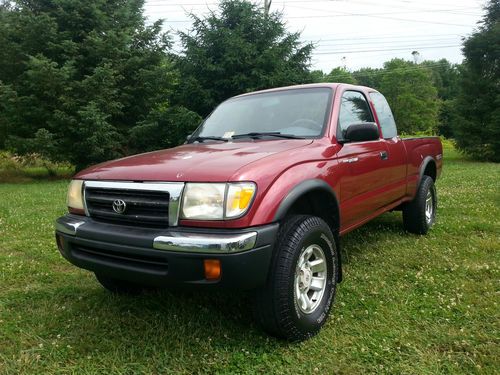 This listing is for my 1998 Toyota Tacoma SR5 Truck. It has the 2.7 Liter 4 cylinder motor mated to the 5 speed manual transmission. It is a 4WD model with the extended cab. The bed of the truck has a bed liner and is in great shape. The exterior of the truck is in good shape w/ some clear coat separation occurring in a few spots. I have provided pictures of these areas.

The interior is in FANTASTIC shape. The seats are free of any tears or stains. There is no abnormal wear. The carpets are in great shape. No funny smells. Non smoker car. There are the fold on jump seats on the extended cab, and Toyota Floor mats come w/ it. There's an aftermarket Pioneer CD head unit installed.
The truck has 220k miles on it and it runs great! I would not hesitate to drive this truck anywhere. Its been very well maintained and has just had new spark plugs, plug wires and all of the fluids changes. The brakes and tires are in solid shape w/ no odd vibrations of noises. Also, the truck has AC and it is VERY cold. It starts up every time, and has never left me stranded. It does not leak any fluids or make any funny noises. Just a solid, well kept Toyota engine.
The frame is a huge problem area for these trucks. The frame on this truck is in fantastic shape. It has always been undercoated and came out of southern Virginia. Its free of any major rust, holes or anything else. Its one of the better frames I've seen on a Toyota truck, that's for sure.
The 4WD engages, the brakes stop, the clutch grabs and feels great. You can cruise at 70mph w/ the AC on and do reasonably well on fuel thanks to the peppy 2.7L 4 cylinder.
If you have any questions feel free to call me at 443 470 9036.
eBay would only allow me to upload 24 pics. I have uploaded additional pictures, including pictures of the frame, to this link: https://picasaweb.google.com/100991618884864337005/1998ToyotaTacomaSR5#