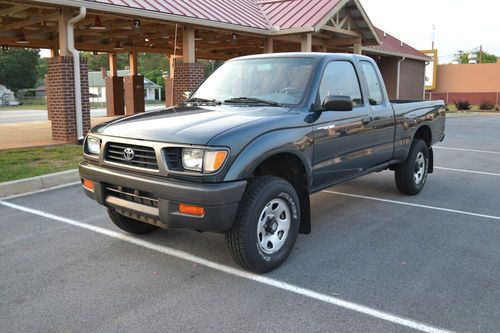 UP FOR SALE IS A VERY RARE FIND. THIS TRUCK IS AS CLOSE TO NEW AS YOU WILL FIND. 1997 TOYOTA TACOMA, EXTENDED CAB, 2.7L 4CYL, WITH 5 SPEED TRANSMISSION, WITH ONLY 16K MILES!! TRUCK WAS BOUGHT NEW IN IDAHO BY A CABELA'S FIELD REPRESENTATIVE. WAS AN OLDER GENTLEMAN. THERE WAS A CAMPER IN THE BED OF THE TRUCK WHEN IT WAS BOUGHT NEW THAT HE STAYED IN WHILE HE WAS ON THE JOB DISPLAYING ITEMS. COUPLE YEARS LATER CABELA'S BOUGHT HIM AN RV TO STAY IN AND TRUCK SAT UNDER SHED AND NEVER GOT DROVE. TRUCK HAS BEEN TAKIN VERY GOOD CARE OF. HAS FEW SMALL ROCK CHIPS ON HOOD THAT YOU CANT SEE IN WITH A CAMERA AND A FEW ROCK CHIPS IN FRONT OF THE BACK TIRES. ALOT OF GRAVEL ROADS IN IDAHO. HAS NO DENTS AT ALL PAINT STILL SHINES LIKE NEW WITH NO FADING AND HAS ABSOLUTELY NO RUST!! NO LEAKS AT ALL OF ANY KIND! TRANSMISSION SHIFT BETTER THEN A NEW ONE. CLUTCH IS TIGHT AND SHIFTS SMOOTH IN ALL GEARS AT ANY SPEED. THE 4WD WORKS GREAT AS WELL I LOCKED IT IN THE OTHER DAY IN MY FRONT YARD TO MAKE SURE IT WORKED. TRUCK HAS NEVER BEEN IN THE MUD. IT DOES NOT HAVE AC. IT CAME FROM THE FACTORY THAT WAY ALL PLUG INS IS THERE UNDER HOOD TO HOOK AN AC COMPRESSOR UP. WOULD COST AROUND $700 TO PUT AC ON IT. THIS IS A BASE MODEL TRUCK WITH MANUAL WINDOWS AND LOCKS. DOES HAVE POWER STEERING, AM/FM RADIO. HAS A BRAND NEW SET OF TIRES STILL GOT THE NIPPLES ON THEM, OIL JUST CHANGED AND ITS SO CLEAR ITS HARD TO SEE IT ON DIP STICK, AND A FULL TANK OF GAS READY FOR THE NEW OWNER TO FLY IN AND DRIVE THIS NICE TRUCK HOME. PLEASE ONLY BID IF YOU GOT THE MONEY! THIS IS A NO RESERVE AUCTION IT WILL SELL TO HIGHEST BIDDER. I RESERVE THE RIGHT TO END AUCTION EARLY IF I GET AN OFFER I CANT REFUSE. CLEAN SC TITLE IN HAND. TRUCK HAS NEVER BEEN WRECKED OR PAINTED. I FEEL I HAVE DESCRIBED THE TRUCK AS HONEST AS I CAN IF THERE IS ANYMORE QUESTIONS PLEASE FEEL FREE TO ASK! THANKS AND HAPPY BIDDING! 864-617-6645