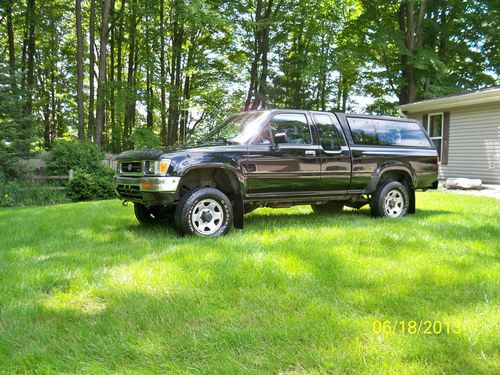 Well folks here you have it, a completly stock, unmodified 1992 Toyota 4x4. Very hard to find one in this shape. Truck has had only 2 owners, myself and my elderly parents that bought the truck brand new. From day one this truck has never been smoked in and has had Ziebart rust protection applied to it that is why you see very little rust on this truck. In the pictures you will see some rust behind rear wheels and a spot on drivers side front fender over tire. The tailgate has some rust at bottom, but I had a piece of black aluminum bent and stuck it on with double sided tape to cover as you can see in rear view picture, looks factory but wanted to mention. As you can see in the picture of inside of bed it looks great, bed has always had a bed mat in it but I just took it out for the pictures and it will be included in sale. Truck has orignal paint but the 1992 factory strips were removed because they did not like them as well as the Toyota letters across the back of tailgate. The motor runs great and transmission shifts as it should. I just installed a new radiator and front brake pads, tires have over 50% tread left. The Leer cap could use a new paint job. The underside of truck looks good also,but that is because of the sprayed on rust protection. The interior is very clean also and everything works as it should. Folks you will not be disappointed in this 21 year old truck with 138,000 miles on it. Pictures just do not do this truck justice please come by and take a look at this beauty. The truck has normal rock chips and small dings as a 21 year old truck would that is driven every day. If you have any further questions ASK BEFORE BIDDING NOT AFTER. And as always with anything used your buying as is where is. Truck is pick up only no shipping. $250.00 deposit through pay-pal with in 24 hours. Remaining balance due when picking truck up. Cash or personal check ( check must clear my bank before truck will be released). Other arrangments can be made if you contact me first.