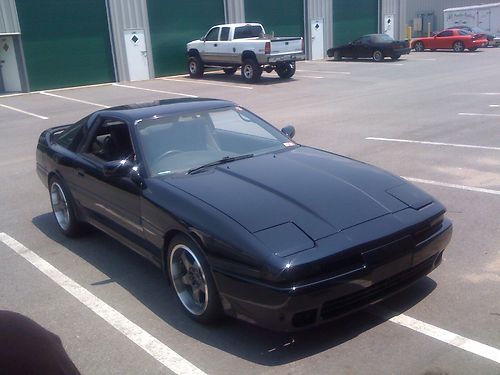 Condition: UsedA vehicle is considered used if it has been registered and issued a title. Used vehicles have had at least one previous owner. The condition of the exterior, interior and engine can vary depending on the vehicle's history. See the seller's listing for full details and description of any imperfections.Seller Notes:"In great condition"

A lot of blood sweat and tears have gone into this setup but sadly to say it's time to move on and let someone else enjoy it.

Engine and turbo setup have less than 4k miles. Body has no rust anywhere, hatch area where spare goes has a lite truck bed coat. Paint job is only a year old and been garaged ever since.


HKS sport 3" cat back (quite with a nice purrr)

Currently running on stock 2jzgte TT ECU she is a standalone away from serious 600+ hp. Currently I would give it a mild 350hp on its stock settings 440cc injectors and airflow.

This is a registered legal RHD MK3 Supra very rare. It's costing more and more to even register a RHD car. So here's your chance to own one for a fairly good price delivered. If your looking at this auction then you know what this car is so bid with confidence.

***Full balance due at end of auction. Delivery time and logistics accounted for on a state to state basis. This vehicle will not be delivered over any borders or across country lines outside the united states. Free delivery Excludes Hawaii, Puerto Rico, Alaska, and over any water. Those states can buy but shipping will be on you the buyer.
All vehicle paperwork will be mailed next business day as auction end to buyer. ***