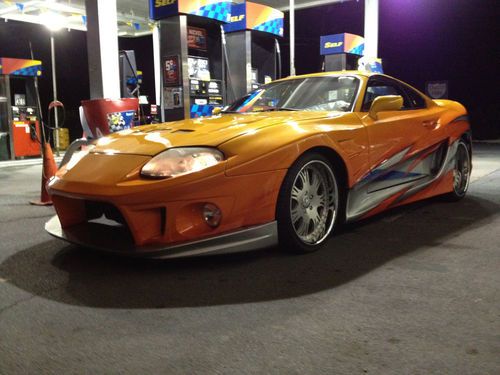 THE BEST OF MY KNOWLEDGE TO EXPLAIN EVERYTHING: SINCE I PURCHASED IT LAST YEAR
I DON'T HAVE TIME TO DRIVE AND TAKE CARE OF IT, ITS LIKE CRIME PUTTING THE VEHICLE IN THE GARAGE AND NOT DRIVING IT
SO I HOPE SOMEONE ELSE ENJOYS IT.
THERE IS NO ISSUE WHATSOEVER IN THE VEHICLE WITH LOW MILEAGE
WITH CUSTOM BODY KIT, CUSTOM RIMS, ITS ONE OF A KIND OVERALL AND ITS CLEAR TITLE
IT HAS ON THE HOOD PAINT CRACK RIGHT BY THE HEADLIGHT CRUST, ONE ABOVE THE GAS DOOR ABOUT 2 INCHES
IT HAS LOTS OF TIME AND MONEY INVESTED INTO IT SO IM PUTTING IT OUT STARTING NO RESERVE PRICE
THANK YOU FOR LOOKING AND GOOD LUCK
IF YOU HAVE ANY QUESTIONS DON'T HESITATE.