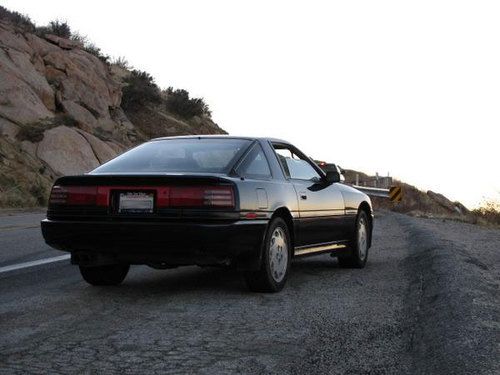 The car developed a small rod knock, so I parked it and then I tore it down (slightly) to fix it, and I have not had time to repair it. So as-is in no-op project car status only. For probably less than a few hundred bucks and a few hours of your time, you can own a $5k car easy and turn around, sell it and make a profit. If I were to fix these same issues, I would be selling it for no less than 5K given its excellent rating.

Head gasket fine, I just had that repaired a bit ago and the tick might have been my imagination or over-acting thoughts of woe...
only things off engine are radiator & related hoses; air intake; a few mounts and the oil pan is on to keep engine clean but nothing is broken down to repair state and engine IS intact!Has clear title. I have possession of the "pink slip" and legal ownership. It has been non-op'd through CA DMV w/ NO back fees due at all.Has a mostly brand new paint job, with minor defects/scratches. It is missing a strip of door trim on driver side too for some reason.Has a broken rear quarter window but a replacement window is included in the sale.Excellent interior. no cracks in dashboard but, it is a bit dirty & dusty from sitting in the shade. (vehicle has been stored in a shaded carport with sun & element protection)
Vehicle Specifics for 1989 Toyota SupraVehicle History Report Summary1989 Toyota SupraVIN #:JT2MA70L3K0109467Report Run Date:Mar-11-2013Provided by AutoCheck, a part of Experian. Copyright Experian Information Solutions, Inc. 2010. All rights reserved*HighlightsTitle Check: OK Odometer Check: OKAccidents: None Owners: 3AutoCheck Score69 = Above range vs. similar 1989 Sport Car - Premium(Below Range under 24Within Range 24 - 50Above Range over 50)Vehicle Inspection:Condition: UsedVIN: JT2MA70L3K0109467 | Year: 1989 Interior Color: BlueMake: Toyota Transmission: AutomaticModel: Supra Vehicle Title: ClearTrim: Base Hatchback 2-Door For Sale By: Private SellerEngine: 3.0L 2954CC l6 GAS DOHC Naturally Aspirated Fuel Type: GASDrive Type: RWD Number of Cylinders: 6Mileage: 175,016 Body Type: HatchbackExterior Color: BlueInterior Color: Blue1. Mileage 1750162. Does the vehicle currently run and drive? see above3. Mechanical issues: so above4. Does body have dents, dings, or rust? Nope5. Ever been in an accident? Nope6. Does interior have rips, tears, stains or burns? Nope7. Have airbags ever deployed? Nope8. Do you have a title that is free and clear of any liens or loans? Yep9. Do you have the keys? Yep10. Are all tires inflated and the same size? Yep11. Is your title salvage or reconstructed? Nope12. Where is the vehicle located (driveway or garage)? Driveway/Carport13. How much were you looking to get for the vehicle? $1200. (Worth $5000 running.)
vehicle says fleet or lease.. yes: first owner leased it, so what????
Also, it says duplicate titles because I requested a duplicate when I realized the first one one had been accidently damaged/destroyed beyond use so I ordered and paid for a new one.  I own this car, no worries there.
As for emmissions, it passed every smog inspection I ever took it to with no problems at all.