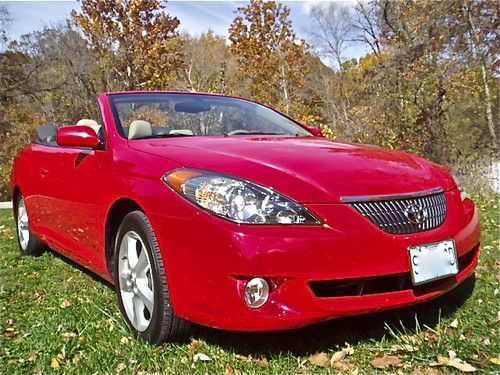 Just in time for Spring and could you want a better color ! Just drop the top and away you go!! I bought this car for my wife on 8/26/2009 and at that time the milage was 32519. The milage currently is 34462 which is a difference of 1943 or 647 miles per year driven since I bought the car. The car has very low milage and has always been garaged. I'm selling because my wife tells me the wind messes up her hair...... go figure.  If your looking for a car in perfect condition and drives like a dream then this is the one. I cannot over emphasize the impeccable condition of this car. Everything works and functions perfectly. I do have the hard boot for the down convertible top (see photo). This is and always has been a non-smoker car.  Clear title.

Kelly Blue Book Private Sale value puts this car at $16,665.
Please review the pictures carefully and ask questions before bidding. I can assure you that you will not be disappointed.
USER REVIEWS for this car ; 9.3 overall rating, 9.6 styling, 9.1 preformance, 9.3 interior, 9.4 quality, 9.3 recommendation
A $500.00 deposit will be due 24 hours after the auction ends and the balance in seven days. Please do not bid if you do not have the money. I prefer using Pay Pal or cash at pick up. If you are shipping you can obtain a quote from any transport company by giving them this zip code ( 63011) and yours. I will work with your shipper for a convenient pick up time.
I am pricing the car under Kelly Blue Book value or dealer resale value for a quick sale. I'm open to any good offer.
YOU WON'T FIND A BETTER ONE THAN THIS !!