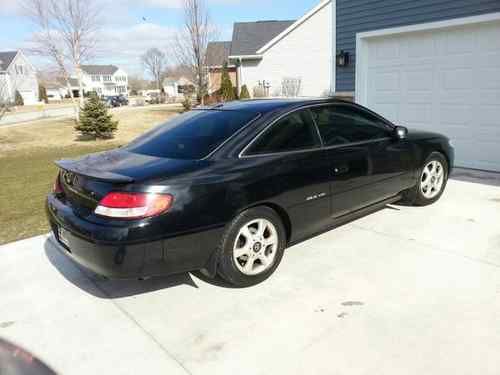 Condition: Used: A vehicle is considered used if it has been registered and issued a title. Used vehicles have had at least one previous owner. The condition of the exterior, interior and engine can vary depending on the vehicle's history. See the seller's listing for full details and description of any imperfections. ...
1999 Black Toyota Solara SLE (V6) with black leather, CD, moonroof. Car has 189k miles. I have owned this car since 2004 and purchased it with 40k miles. This has been my daily driver for the last 9 years. It has some rock paint chips on the hood from highway driving and a few other small dents/scratches as you would expect from a 14 year old car with 189k miles. Other than that it drives great for its age and gets great gas mileage. The ABS light is on (has been on for several years). There is a ABS speed sensor on the rear wheel that needs to be replaced and I chose not to fix it. Kelly blue book value is $3,800-$4,000. I have the title in hand. Let me know if you have questions.  This car is being sold with as is / where is with no warranty expressed or implied.  With the exception of the minor cosmetic wear (paint chips on hood and a few small dings - one with slight surface rust on drivers side rear qtr panel) and the ABS light on, there are no mechanical issues with the car. The car also does have a Viper Remote Start and tinted windows. The SLE is the fully loaded model (8 way power driver seat, Climate Control, etc). Comes with 2 full sets of keys, Stock Remotes and Viper remotes.
Currently the driver's side exterior door handle is loose (1 of the 3 bolts broke). The door does open and close, however this causes the latch to stick at times when opening from the inside.  The door does open from both the interior and exterior of the car.... what happens is that sometimes you get out out of the car you just have to raise the exterior handle before closing the door to reset the latch.  The exterior handle is availble online for $85 and quote at local Toyota dealer is 1 hour at $65.  I will have this fixed before buyer picks the car up, or issue a $150 credit if buyer prefers to fix themselves.