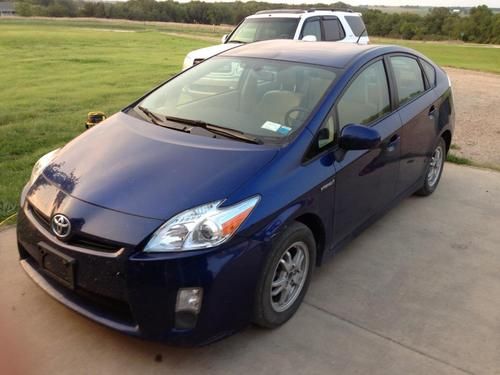 Condition: UsedA vehicle is considered used if it has been registered and issued a title. Used vehicles have had at least one previous owner. The condition of the exterior, interior and engine can vary depending on the vehicle's history. See the seller's listing for full details and description of any imperfections.Seller Notes:"The dash has a few scratches from the dash that was taken out of the wrecked vehicle. The body has a few minor dents and scratches. Also, the cable to the fuel door needs replaced."

I am selling a 2010 Toyota Prius that has been rebuilt from New York. I bought this car from a guy and have driven it approx. 11k miles this past summer but I am reluctantly going to have to sell it. The car was flood damage but has been rebuilt . All the electrical components were completely gutted and had been replaced from another car that I was given pictures of from the guy that I bought it from. There are no problems with the engine, transmission or the battery pack. The buyer will get all the pictures and documentation that I received. It does have a few minor dents and a few scratches on it coupled with the fact that it is a salvage vehicle, I will be starting the bidding with no reserve. The mileage is now 31,560 but it is a daily driver and will be a little higher upon purchase. Also, since the car was in a flood the salvage certificate will state true miles unknown, however everything that was taken off the wrecked car has the true mileage. Please call me with any questions. You can text or call me at 785-280-1142. Thanks! Kevin.