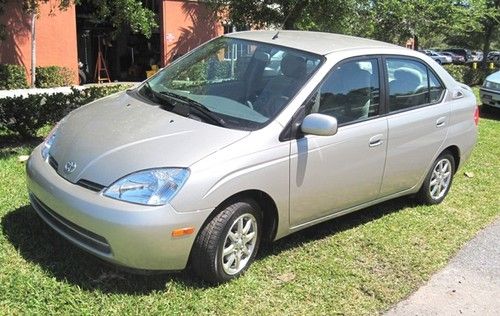 This listing is for a silver 2003 Toyota Prius with beige interior. It is a Hybrid vehicle with a new battery and new tires. The EPA rates the Prius at 52 mpg in the city and 45 mpg on the highway, theoretically allowing over 600 miles between fill-ups. It has automatic climate control, air conditioning, power windows and locks, power steering, anti-lock brakes, keyless entry, cruise control, a DVD-based navigation system, electronic information center, side-impact airbags, daytime-running lights, a six-disc CD changer and a rear spoiler.
Only 134K miles, this vehicle has no issues, mechanical or otherwise, is immaculately clean and has been beautifully maintained.