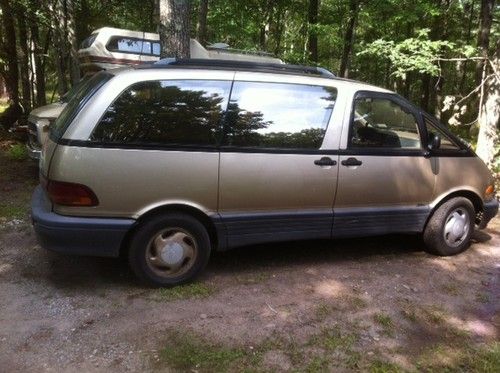 Condition: UsedA vehicle is considered used if it has been registered and issued a title. Used vehicles have had at least one previous owner. The condition of the exterior, interior and engine can vary depending on the vehicle's history. See the seller's listing for full details and description of any imperfections.Seller Notes:"No middle seats"

This is the best van Toyota ever made. It's AWD, 4 cylinder and can hold several sheets of plywood. There are 4 new tires, new muffler, new swaybar fittings and other upgrades totalling $2000. The van runs beautifully and looks great for it's age.
I am not the original owner. The buyer will buy directly from me and then take possession of the van and title. All shipping fees paid by buyer. A down payment of $300 is required within 24 hours of auction close via paypal. Balance to be paid in full in cash upon pick up. If you are a Previa afficionado this is the car for for you. I have owned 5 of them and I'm sorry Toyota stopped making such a great van. I'm selling this because I have another one and I came across this by accident and
I don't need 2, even though I'd love to keep it.