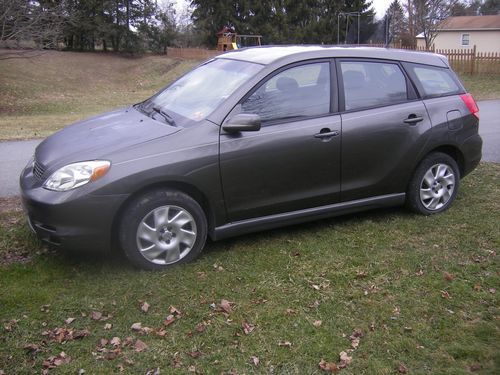 I am selling my Matrix because I have purchased a newer Matrix.

This Matrix is AWD, consistently gets 30 mpg highway and has no known mechanical problems. It is smoke free and the CD/FM radio provides excellent sound with multiple speakers.

I am the second owner and I bought it with 41,101 miles from a local private party. The Carfax will indicate an accident. It occurred with the original owner, required a repair of the front driver side panel and has given me no problems in the 90,000 miles I put on this car. There was no damage to the frame.

The car has some scratches and blemishes consistent with a vehicle of this age and mileage. There is no significant rust.

I am located just off I-64 about half way between Roanoke Va and Charleston WV. The car can be seen in either Alderson or Lewisburg WV. Please look over the pictures and contact me if you have any questions.