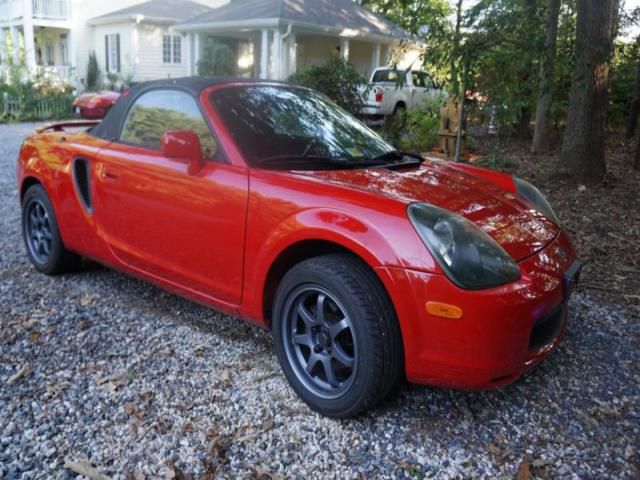 My eMail : hazelstroud276523@yahoo.com AN AMAZING FUN CONVERTIBLE TRUE SPORTSCAR WITH A NEWER 45k MILES (180HORSEPOWER) JDM 2ZZ-GE ENGINE, NEWER HIGH GRADE TIRES,UPGRADED WHEELS, NEWPAINTJOB, NEWER OEM 2ZZ CLUTCH, TOP IN FINE CONDITION WITH SPOILER (SUBTLE ONE)AND AWESOME FUN. NEWER 15 X 7 MB WEAPON WHEELS. THE MID ENGINE DESIGN MAKES ITRESPONSIVE, FUN AND EVERYONE LOVES HER LOOKS. WE HATE TO SELL OUR BABY, BUT SHEWILL GO GO GO. THERE ARE LOTS OF DETAILS LIKE NEW SUSPENSION PARTS, NEW ENGINEWITH HIGHER POWER. AS A 2001 VINTAGE THERE ARE THE USUAL SIGNS OF WEAR AND TEARBUT NOT OBVIOUS. HAS TWO VERY NICE CAR COVERS. YOU WILL BUY HER IF YOU DARE TODRIVE HER. THE PAINT IS "SUPER RED" AND IS ON FIRE. REAR WINDOW IS GLASS, NOTPLASTIC.