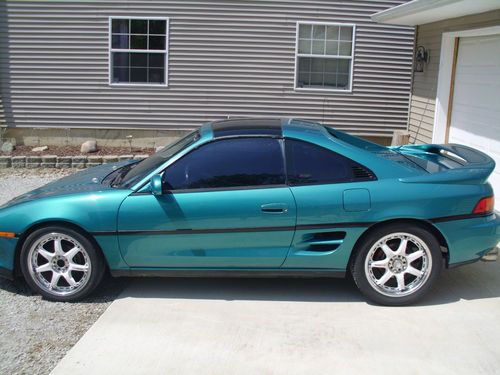 My wife is finally letting her little car go to a new home. This car is in good condition especially for a 20 year old car. It runs like a champ doesnt smoke at all. as long as we have owned it the car has been garage kept and the previous owner did the same.It has recently had all the brakes replaced and new rear calipers. It has a magna flow dual exhaust.The previous owner had a heavy duty clutch installed in it Im not sure of the specs and cant seem to find the receipt he had given us for it, aslo had new rear tires installed last fall so they havent been driven on alot since the car doesnt get to see snow. The wheels are R-1 racing .Also has a pioneer touch screen stereo in it and sounds excellent. The t-tops pop right out and in easily and do not leak.There is some paint fading on the top buy the rear window and on the spoiler and underneath on front as you can see in the picsTha car alos has a/c but may need charged it doesnt work at the moment. The driver seat also is worn on the outside as you can see in the pic. Car has 170000 miles on it and plenty more to go. oil and lubes have all been done on a regular basis.We are also including the original set of wheels and tires still in great shape with plenty of life on them.

A 500.00 NON refundable Deposit required after auction is won You can pay balance in cash when you pick it up,NO money orders No cashiers checks and no personal checks.
Please ask questions before you buy,This car is being sold as is where is